Two weeks ago I got a phone call, Tarq hurt his tongue, I should come over, the vet was coming too.
It was total horror! His tongue was torn out of his mouth! It was lying in the next (empty) stable.

It looked even worse inside his mouth…
The vet gave us ”Bute” medicine and painkiller, and antibiotics, and we had to make soups for him to eat. Making sure he would not get a massive infection was the first priority. If we could avoid an infection he would probably be alright the vet said. He would have to learn how to eat again. After eating we would have to rinse his mouth to get all food matter off the ragged remains of his tongue.
Tarq could not eat that evening. probably too much pain. He was also very cold so I borrowed a blanket for him.
I could not sleep at night.

Two days later I took him for a walk and he wanted to eat grass. Grass is soft so I thought I’d let him try. He dropped some bites but he managed somehow to get some up and chew it. The Tarq was enjoying himself very much.
So the next morning I took him out to graze again, he was very feisty! So I took him into the arena to loose some steam.
He went nuts! 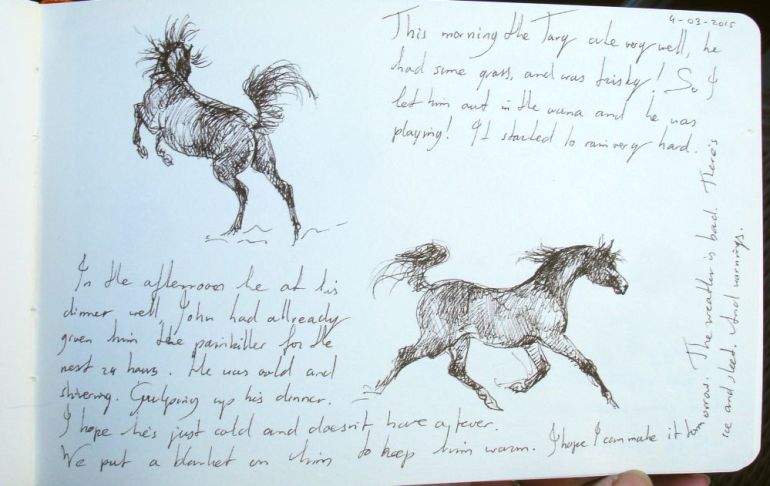 This was amazing, I felt a lot better because Tarq was just having fun and seemed unfazed.
And very keen on his dinner!
He was in a rather, ehm, opulent condition, so he had some calories to spare. We fed him sebior pellets, they dissolve very easily in water, and are very nourishing so he would get enough nutrients. Which he did. I think he didn’t loose a pound of fat during the whole disaster.
If anything he got fatter!
I still slept badly at night.

When the vet came for a check-up, we saw that his tongue looked very good; all pink and healthy and no sign of infection! Just to be sure I got some antibiotic injections to give to the Tarq because he didn’t like taking the powders, and he knew they were in whatever wonderful tasty stuff we gave him. even the special treat mixes which Tara gave me. He was very interested in the mixes, but as soon as the powders were added he turned his nose up!

So the Tarq is doing very well, and here is my Daily Painting to prove it!

Oh, I haven’t been talking about my new Daily Painting project have I?

Use the QR code to subscribe to my fun newsletter